IIn 1954, he established Carman Construction Limited and expanded services to the Mining Industry throughout Northern Ontario.

Today the fourth generation has started to take on a management role with Carman Alexander Fielding becoming Vice President of Operations in 2019. Carman G.A. Fielding Jr. is still active, taking on an advisory role.

Over the years, Carman Construction Inc. has successfully managed fluctuating economic and seasonal conditions. Carman has supervised numerous sub-contractors and overseen a seasonal work force ranging between 30-150 employees, accumulating over 2.6 million man hrs or an approximate average of 130,000-man hours per year with zero lost-time hours since 2000.

Over the years, Carman Construction Inc. has expanded its operations to fulfill its clients’ needs in:

Community relationships have been important for Carman Construction Inc. since its early days – a tradition that carries on today. Carman has worked closely with the ATIKAMEKSHENG-ANISHMANWBEK (formerly Whitefish Lake First Nation) and the WAHNAPITAE First Nation. So valued is this relationship, that Carman Fielding Sr. was named honorary Chief for a Day. The Whitefish Lake First Nation Community gave Carman the title “ASWESKONG”, which when translated means “man who is into everything”. 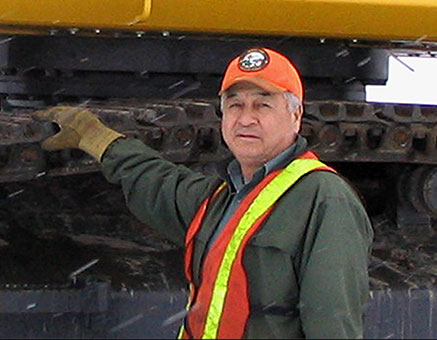 Our present fleet of equipment is comprised of over 135 pieces, ranging from 5 Tonne to 165 Tonne units. The company has had multiple projects for all of the major mining and resource-based companies in Ontario.

We have completed projects with various revenues that have ranged in the mid to high 8-digit values annually.

A short list of present and past clients include: